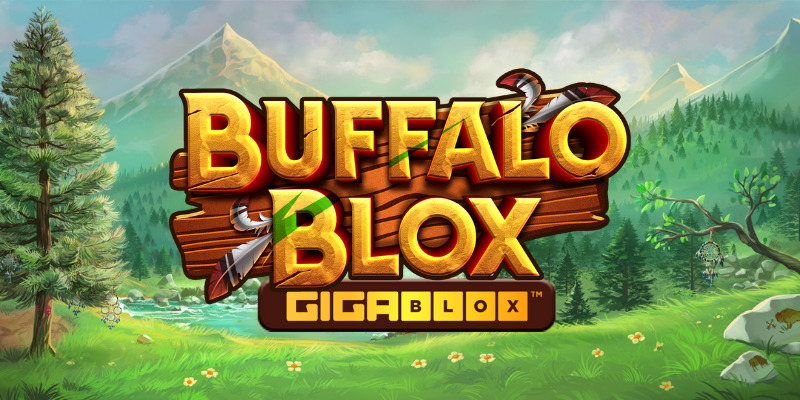 Buffalo Blox Gigablox is the latest in Yggdrasil’s remarkable series of slots, with a clear focus on the huge buffalo. It will be the primary character, but there will be plenty of other good visuals inside. Another incentive to check it out is that it’s a Yggdrasil & Jelly collaboration slot with a handful of excellent features.

Buffalo Blox Gigablox is a 5-reel slot with a total of 20 paylines. The potential isn’t particularly large, at just 2,500x the stake, and the RTP of 95% doesn’t entice me to promote it. Coin quick prizes, Coin Wilds, scatters, and free spins with colossal symbols are just a few of the primary features available.

Buffalo Blox Gigablox allows you to wager anywhere between $0.20 and $100 per spin. It’s entirely up to you how much you want to risk. Moving on to the real money slot’s highest payouts, the game falls short. The largest jackpot will be 2,500x the round’s wager, and the free spins will be the ones most likely to pay that amount.

One cause for the poor payout could be the RTP, which is only 95%, which is a low percentage for a modern game.

Simply described, a Gigablox is a big symbol that may be placed in various locations (2×2, 3×3, etc). You’re getting a lot of symbols of the same type, which increases your chances of really forming winning combos. However, the gaming area still uses standard paylines, thus getting rewarded is the same as it is in conventional slots.

The Coin is a crucial feature symbol because the amount of times it appears on the reels determines the type of payment you receive right away. If you have 6 to 20 coins on the reels, you can win anywhere from 2x to 1,000x your stake.

On those same reels, you’ll find the Diamond scatter, which can be used to activate free spins. You’ll need 5+ Diamonds at once, with each one giving you 1-2 spins. Once it’s started, the feature can be reactivated. It’s easy to get prizes from coins because you can get one for as little as 4 pennies.

Wild Coins are also available at this time, and they aid in the creation of new combinations.

Buffalo Blox  Gigablox is designed in a Native American style, with a concentration on North American wild animals that were frequently hunted by the inhabitants. These creatures appear as totems at the edges of the gaming area, but they also appear among the symbols. The Buffalo will be the main attraction, but eagles, bears, and the wolf will also be there. The Royals are the lowest paying symbols in the game.

Of course, if you glance about the reels, you’ll notice the beautiful terrain of North America, with trees, rocks, and mountains visible all around.

Buffalo Blox Gigablox has a nice design and a few features that I could get used to. A 95 percent RTP, on the other hand, is far too low these days, especially when so many other slot machines perform better.