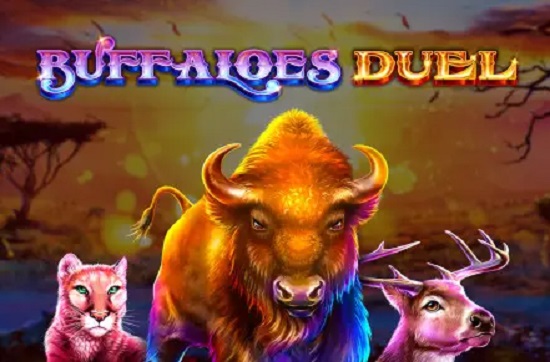 Buffaloes Duel is the latest slot machine from GameArt and SlotVision, and it features a popular subject of North American fauna, but with the help of the Mirrored Reels technology, it manages to turn it into something unique.

In a system known as Mirrored Reels, you’ll have 5×4 reels that are split in half. There are a total of 50 active lines there. With a little luck, this slot machine might pay 2,321x the investment, albeit it should be noted that it has a high volatility and a 96 percent RTP. There are a few important elements in this game, including wilds, scatters, free spins, and the Mirrored Reels mechanic.

The minimum stake involves the use of 50 $0.01 coins, thus the starting point is $0.50. You can increase the bet level and per-line wager to reach as close to the $50 maximum bet as you want.

While Buffaloes Duel is considered a high-risk game, it does not pay as much as other high-volatility slots. The maximum amount of money that may be won inside is 2,321 times the investment. Despite my dissatisfaction with the risk/reward ratio, the Return to Player is 96 percent.

The Mirrored Reels technology is what distinguishes Buffaloes Duel from other games. You’ll notice that all of the columns are divided in half, with a thin border dividing the top two from the bottom two. If you look at the top vs. bottom of the reels, they spin in opposite directions, although they show the same symbols. The symbol at the top of the top reel will be identical to the symbol at the bottom of the bottom reel. The bottom symbol of the top reel and the top symbol of the bottom reel are the same. Those two parts are synchronised, but the effect is reversed.

Buffalo Wilds are your standard substitutions, symbols that you use to create whatever new combination you’re working on at the time. They don’t affect the game’s scatters, and they solely serve as substitutes for ordinary symbols, as is customary.

When the Buffalo Wild appears at the bottom of the top reel as well as the top of the bottom reel, the Clash can occur. Because this happens once per reel due to the mirrored effect, you can have up to 5 Clashes. The number of conflicts affects whether or not the round’s winnings are multiplied. For 1 to 5 Clashes, they’re at 2x, 4x, 6x, 8x, or 10x.

When six to ten scatter symbols appear, you can win up to 25 free spins (it can happen once on each half reel). There’s also the option to reactivate this feature.

It has an extremely easy-to-find motif that is tied to North America’s buffalo, as well as various other instances of wildlife from the region. It starts with the lowest five Royals, numbered 10 to A, and then moves on to photos of bunnies, deer, cougars, and wolves. The Buffalo is a free-roaming animal, but the Eagle is a scatter.

The Mirrored Reels mechanic in the Buffaloes Duel slot is intriguing, but I’d also add the Clashes and their up to 10x multipliers, as well as the bountiful free spins, to the list of fantastic features that make this slot worth investigating.