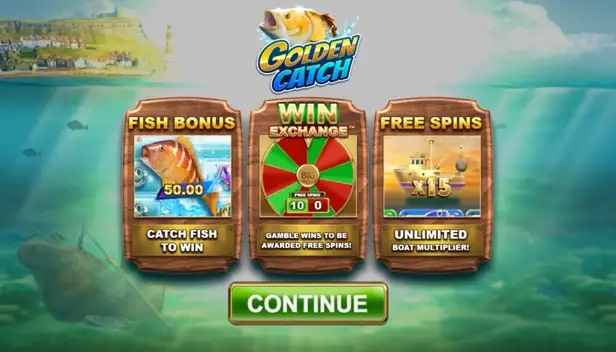 Golden Catch, which comes from one of the industry’s biggest names, is the type of game that everyone will be talking about when it launches. Its inventor, Big Time Gaming, was also responsible for the creation of the Megaways engine, which was later licensed to a number of other companies. It helped it become one of the most popular techniques to build high-volatility slots in recent years. Players are likely to respond positively to a fishing-themed game with high volatility and the potential for large payouts.

Golden Catch will use the standard Megaways system, with up to 117,649 ways to win on each of the six reels. Other benefits of this engine include the large maximum prize (31,430x the stake), but there is also more volatility, which should be addressed (with the RTP at 96.53 percent though, so it kind of balances out). There are several good features, including the reactions/cascading reels, as well as wilds, scatters, and free spins with escalating multipliers.

Megaways slots have a limited betting range because they can pay out a lot of money. We’re looking at stakes between $0.20 to $15 each spin in this situation.

Golden Catch’s top reward can be fairly large, and it’s not always normal to see a jackpot of 31,430 times the total stake. The long-term volatility of the slot, which is predicted to be high, is the price for such a payout.

Golden Catch, on the other hand, has a high RTP of 96.53 percent, which I’d be wary of because the figure is far greater than the average used in most slots of this type.

Golden Catch has six reels, and the number of symbols on each one is determined at random (between 2 and 7). You have 117,649 Megaways or ways to win if you get 7 symbols on all reels.

Following the formation of any winning combination, the symbols will be removed from the reels by a Reaction. New ones will arrive to take their place, potentially leading to more victories (and then additional Reactions).

In the empty positions created by Reactions, fish bonus icons will also be left behind. They contain prizes and can be collected whenever boats appear above the reels in the region. Each boat will gather all of the prizes that are displayed in the gaming area.

While the Anchor Wild does not provide you with anything directly, it is a useful replacement in the long run. It’s only for the second through fifth reels (middle four columns).

The main feature is 10 to 16 free spins, which are triggered by 3 to 6 scatters (and can be retriggered by 3+ additional scatters). The Collect mechanic, which uses the boats at the top, is one of the things that has been improved here. The multipliers on the boats are now increasing (1x for the first one, 2x for the second, etc).

Golden Catch is a slot machine with a fishing theme, as you might expect. You can see the reels sunk underwater, as well as long-lost sailboats at the bottom. The top of the ocean is also visible, with fishing boats cruising in a gulf near a little fishing community.

The symbols begin with the basic Royals that appear in every BTG slot, six of them going from 9 to A. The fake lures then appear in the form of fish in purple, red, blue, and green colors. As a result of the reactions, real fish with prizes appear. Golden Catch Coins and Anchor Wilds are also feature triggers that can appear.

Golden Catch will do a fantastic job of providing something intriguing to play for Megaways slot fans. The payouts are substantial, the RTP is above average, and the features aren’t your typical ones, so there are some compelling reasons to play this game.